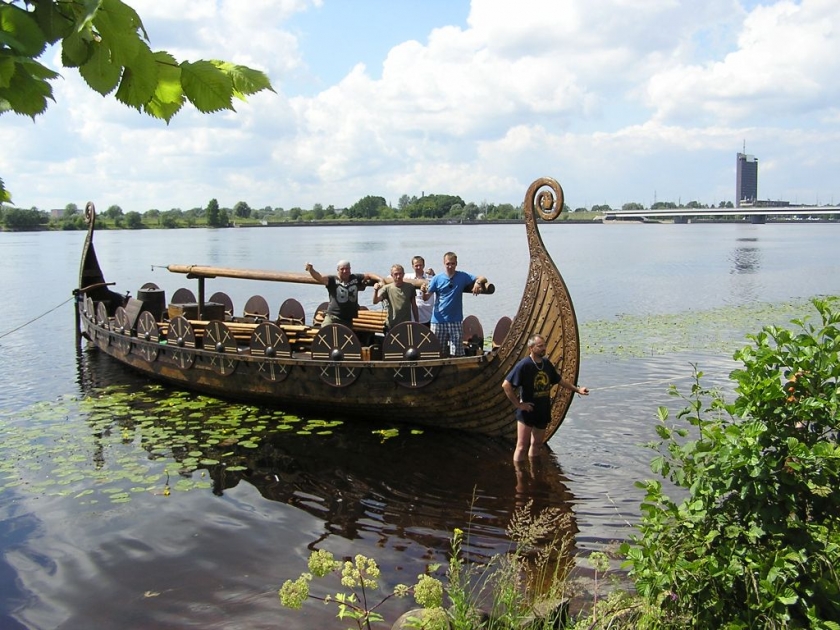 On 29th June 2016, Viking ship “Indriķis”, built by Latvian craftsman Juris Zīle, was launched to the Daugava. It will be accessible to anyone interested to sail.

Captain of elegant Viking ship Normunds Jērums told to the portal buratajiem.lv that the first miles along the Daugava waterway were carried out honorably. The ship has good buoyancy, durability and stability, but the waves generated by the recreational boats did not affected Viking ship at all.

Normunds Jērums also revealed that on this journey engine was used, but soon “Indriķis” will be equipped with a sail and two masts. One of the masts will be so high that the ship could pass under the bridges in Riga, in order to sail as far as possible upstream of the Daugava.

The Viking ship “Indriķis” is reduced the replica of the world’s most famous 9th century Oseberg Viking ship, found in Norway. The ship has been built in four years – from 2010 to 2014. Everything – from the preparation of materials to drawings, carvings and ready-made ship – is the work of master, craftsman Juris Zīle.

The ship’s frame, beams and plating is made of oak wood, but a deck of pine wood. It is abundantly decorated with carvings featuring mythological beings and vegetation.

For the first time, “Indriķis” was shown to the wider audience in 2015 at the Ķīpsala exhibition “Baltic Boat Show”. After that, it had year-long home stay on the island of Dole by the Daugava Museum.